Let’s talk fall. I’ve already mentioned that I have mixed feelings about fall. I mean fall started and I instantly caught a cold. Which turned into an upper respiratory infection that I had for all of October. Gross.

But fall also has football [I’m at the point of the season where the Bears just make me sad] and hockey [Go Blackhawks!]. And pretty leaves. And sometimes nice weather [Being in Indy that means we have three days of mid 60s and then seven days of mid 30s. Reason for the cold I mentioned above.

But I thought that this year, I would give fall flavors a chance. Like sweet potato. And butternut squash. But not pumpkin. I’m one of those weird people who does not like pumpkin. #notbasic

Pretty Spinach from the Farmers Market. Which went into the rice.

This rice is very high on the fall flavor list. Which is probably why I’m still undecided on it. I mean, it definitely is high in flavor but I don’t think its one of my flavors. Summary: Still not a fall person. Maybe the soup I’ll be posting about this Thursday will do the trick.

1. Prepare the Rice with the chicken broth.

2. Mix up the ingredients for the Maple-Dijon Vinaigrette.

3. Next chop up all your kale/spinach. Then skin your sweet potato and chop into cubes.

4. Next boil the kale/spinach for 4-5 minutes. Drain, and then when its cool squeeze out the excess water.

This is all I had after the spinach/kale was drained of water.

5. In the now drained skillet, melt butter and add the brown sugar and sweet potatoes. Salt them and saluted until caramelized about 8-10 minutes. MAKE SURE TO watch your potatoes. Otherwise they might burn on you. See picture below for an example.

6. Add the kale/spinach, cooked rice and vinaigrette to the skillet and combine. Add your crunch factor here.

And that’s how you get fall in your mouth. I gave the recipe a 2 on my rocket science scale because I burned my potatoes and the recipe really does need a crunch factor (which I didn’t have the first night I made it). It also takes longer than expected to put everything together.

About 50 minutes to cook from start to finish. 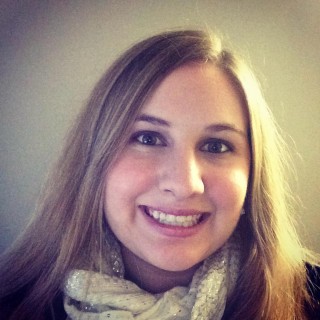 I'm Sarah, the blogger behind Rocket Girl Cooks! I write about my two passions, Cooking and Rocket Science (shocker, I know). My food blog is mostly recipe reviews with my step by step picture instructions. Then I write a Sunday Science post about all things Aerospace! There are also some rambling thoughts thrown in for good measure.